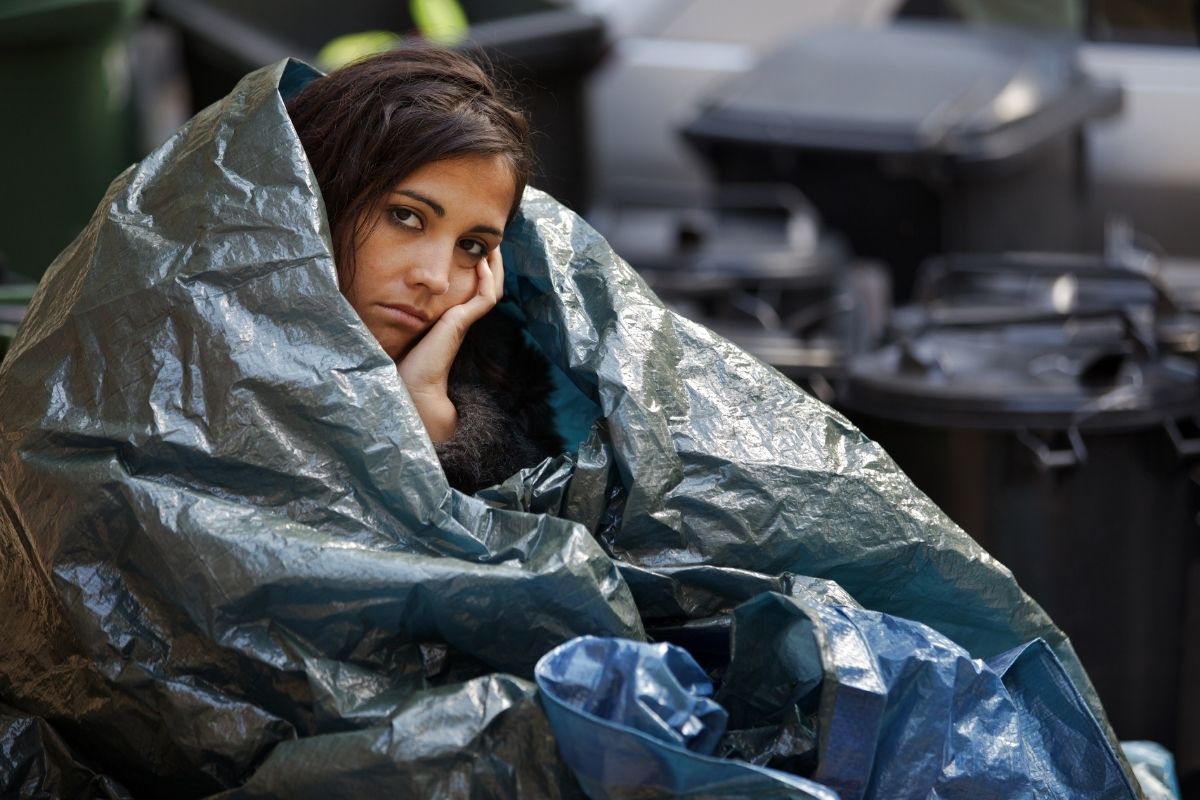 When people think of homeless people, the first images that come to mind are adult males either huddled up in the sidewalks or panhandling on the streets. But homelessness affects a significant number of women too. In fact, homeless women make up 29% of the country’s homeless population.

Unfortunately, the plight of homeless women is rarely highlighted in the articles and reports about homelessness. And while being homeless is tough for everyone, it’s especially a challenge for women.

That’s why, in this post, we’re highlighting female homelessness, along with its causes and challenges to help you understand what life is like for homeless women.

What Causes Homelessness in Women?

Homelessness, as you probably know, is a complex issue caused by a  myriad of factors. For women, the following are the common causes of homelessness:

Women fleeing from abusive partners often have to leave their homes. With nowhere to go, most of them end up in homeless shelters or worse, on the streets.

This is why domestic abuse is the leading cause of homelessness in women.

According to the National Center for Children in Poverty, more than 80% of homeless mothers with children have had previous experiences of domestic violence. While another study shows that up to 57% of homeless women point to domestic violence as the immediate cause of their homelessness.

Aside from physical and verbal abuse, sexual abuse has forced many women out of their homes too.

A 2001 report says that 61% of girls who run away from home claimed to have done so because of sexual abuse. In adult women, sexual abuse from their employers often forces them to quit their jobs even if it meant becoming homeless.

In some cases, women who are running away from their landlord’s sexual advances may also find themselves with nowhere to stay for the night.

Mental health issues aren’t really exclusive to homeless women. But with the added trauma of sexual abuse and domestic violence, anxiety and depression often run high among these women.

Plus, being forced out of their homes and living unsheltered on the streets also worsens their trauma. It’s no wonder why unsheltered women are more likely to suffer from mental illness than sheltered ones.

It’s no secret that addiction is rampant among the homeless. But like most people, substance and alcohol abuse in homeless women has deep roots.

One study suggests that women who have addicts and alcoholics in their immediate circle are more likely to become one themselves too. Though some women also turn to drugs and alcohol to “escape” the trauma of sexual and domestic abuse.

Though the US has made great leaps in terms of feminism, gender stereotypes are still robbing women of the right to education.

In certain communities, child brides are still common. And girls who enter these types of marriages are often forced out of school. This robs them of the opportunity to get a job, making them financially dependent on their husbands. So when they’re abused or get turned out of the house, many of them are left with no means to support themselves.

Why is Homelessness Different for Women?

The homelessness experience can vary from person to person. But in general, it’s more difficult for women. Here’s why:

Feminine hygiene products like tampons and sanitary pads are a necessity for women. But for homeless women, they’re usually a luxury.

In the US, a box of tampons costs an average of $6. That’s about an entire day’s worth of food. That’s why for homeless women, it’s often a struggle between putting food on the table or buying menstrual products.

2. Homeless women are more likely to get assaulted than men.

Homeless women are far more likely to become victims of violence and sexual abuse than homeless men. That’s according to a report published by the Office of Justice Programs (OJP). While another report claims that homeless women are more prone to rape than sheltered women.

As per the said reports, one main reason why homeless women are more at risk of violence is that their day-to-day routines are more exposed to offenders. The streets obviously don’t provide much hiding ground when violent perverts are chasing you down in the middle of the night.

In addition, many homeless women are also victims of childhood abuse. So they have a warped sense of what is normal and acceptable. If they’ve been repeatedly abused before, then assaults and violence may seem nothing new to them.

A lot of homeless women also don’t report instances of violence against them for a number of reasons. This includes shame and fear of retaliation. Not to mention the fact that abuses against homeless women don’t really rank high in the list of police priorities.

Aside from the lack of education, various factors often limit a homeless woman’s employment options.

For one, many homeless women are single mothers. Some of them are pregnant while others have babies and small children to care for. This usually prevents them from taking on a full-time job.

A study also suggests that, even with similar qualifications, women are 30% less likely to be called to an interview than men. The prospect of months-long maternity leaves also puts women at the bottom of the hiring priority list.

4. Many homeless women are reeling from domestic abuse trauma.

As mentioned, domestic violence is one of the main reasons why women become homeless. The years of physical and verbal abuse often take a toll on their bodies.

Aside from mental health issues, many of them are also suffering from conditions arising from stress and malnutrition. But because of their living situation, access to proper health care is often nil. That’s why they are usually at risk of developing severe medical complications.

5. Being homeless is more difficult when you’re pregnant or have children in tow.

This one is pretty obvious. Homelessness is already difficult for individuals.

Just imagine what it’s like for pregnant women and those who have babies or children to look after. Imagine a mother’s pain of having to drag her kids from shelter to shelter while watching them suffer from hunger. Or when one of the kids gets sick and they have limited funds and nowhere to turn to.

These are the grim realities of life as a homeless woman. So the next time you see one, be a little more compassionate. You don’t know the kind of battle they’re fighting.

6 U.S. Cities With the Highest Homeless Population Why is Homelessness a Problem?