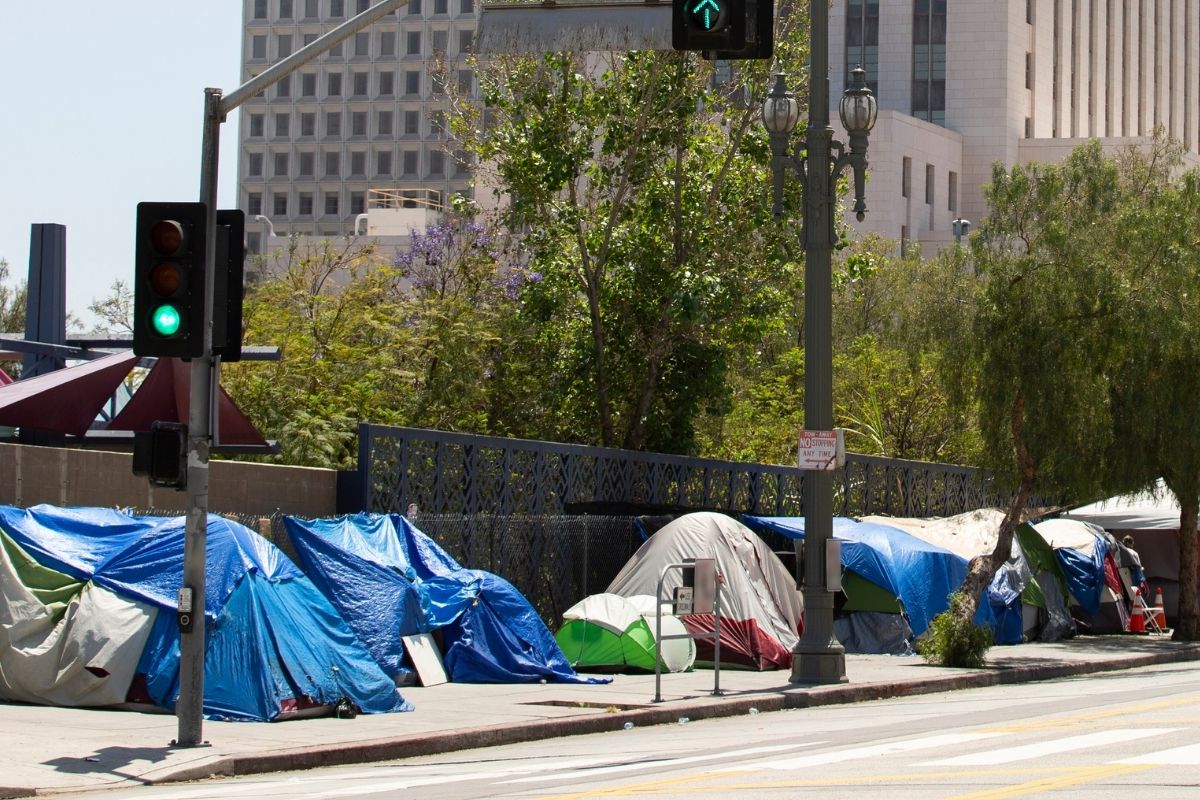 According to government data, more than half a million people are experiencing homelessness in the US on any given night. This only tells us what we’ve known all along: our country is facing a homelessness crisis of crippling proportions.

But if you look at the data closely, you’ll see that most of the homeless population are clustered in major cities and urban centers. In some cities, you’ll even see seemingly endless rows of tents pitched on the side of the road.

In a 2021 report by the US Department of Housing and Urban Development (HUD), nearly 6 out of 10 people experiencing unsheltered homelessness are in an urban area. More than half of them are in Continuums of Care (COC) that cover 50 of the nation’s largest cities.

To help you get a clearer picture of the homelessness epidemic plaguing our major cities, we’ve listed below the US cities with the highest homeless population.

This data is taken from the HUD report we’ve cited above. However, the report organizes information per COC, which may sometimes cover multiple cities or an entire county. Since we’re talking of cities here, we’ve excluded those COCs that encompass multiple places. Instead, we focused on the ones that cater exclusively to one city.

Based on HUD data, here are the cities with the highest homeless population in the US:

If you’ve ever lived in the Big Apple, then you’ll understand why the city comes first on this list. As one of the most populous cities in the country, housing prices in the city have skyrocketed over the years. Rental costs for a one-bedroom apartment average at around $3,000 – way more than the national average.

In addition, the city prohibits camping or putting up tents in rest areas and public parks. With all these, it’s not really surprising that the city has one of the highest homeless populations in the country.

The second most populous city in the US also comes second in terms of the number of homeless people roaming its streets.

Just like New York, this city is plagued by steadily rising housing costs. As a result, many LA residents found themselves living in tents erected on the city’s sidewalks. From a small section of downtown LA called “Skid Row”, these encampments are now popping up all over the city.

In recent years, however, the city has tightened its rules against homeless camping in public places. Though these measures seem to have only increased the population in homeless shelters. It’s not doing much in terms of curbing the city’s homelessness problem.

Famous for its coffee culture and tech company headquarters, most people outside of Seattle are probably wondering why this city made it to this list. In truth, Seattle is grappling with a homelessness problem of devastating proportions.

Thanks to its booming tech and music scene, Seattle has become one of the fastest-growing large cities in the US. But this also raised the city’s cost of living, including rent. Just like most major cities, the city also deals with racial and economic disparities, addiction, and mental health issues. All of these only worsened the city’s housing problems leading to increased homelessness.

San Jose is the largest city in Northern California and the third most populous in the entire state. Despite being known for its affluence, the city is home to one of the country’s largest unsheltered homeless populace.

In fact, it’s estimated that there are about 350 encampments all over the city at any one time. One article blames this on the city’s lack of homeless shelters. While other people blame the city’s punitive approach and lack of concrete plans to address homelessness.

San Francisco’s problem with homelessness started to emerge in the 1970s and 1980s. With the rapid deindustrialization, many people lost their jobs. On top of that, the city is also reeling from the rapid rise of housing costs and government cutbacks on social services.

The deinstitutionalization movement of the ‘70s also led to a mass transfer of mental health patients from institutions to community-based clinics. Unfortunately, most of them were reintroduced into society without enough support. Without the necessary social or employment skills, many of them ended up on the streets.

Over the years, many policies have been introduced to curb the city’s homelessness crisis but to no avail. Today, San Francisco and most of the bay area is dealing with one of the worst homelessness crisis in decades. It’s even estimated that out of the city’s more than 8,000 homeless people, over 5,000 are unsheltered.

Like most major cities in the Golden State, San Diego is also dealing with one of its worst homelessness crises in decades. Rising costs of living coupled with stagnant wages, mental health issues, and economic inequality are throwing people off their homes and into the streets.

In addition, the city has punitive laws against homelessness. In San Diego, it’s illegal to live in your car or camp on beaches and public spaces. Doing such can earn you a citation ticket with a penalty of up to $100.

What Can You Do?

Unfortunately, there is no magic formula that can end homelessness overnight. It takes a collaborative effort from the government and society itself to put an end to this tragedy. But that doesn’t mean you can’t do anything to help eradicate homelessness.

Simply raising awareness about the issue can go a long way. You can also donate to or volunteer in homeless shelters, soup kitchens, and other organizations that help the homeless. Every single act can create an impact. As the Dalai Lama said. “just as ripples spread out when a single pebble is dropped into water, the actions of individuals can have far-reaching effects.”

How Do Homeless Shelters Work? What Life is Like for Homeless Women